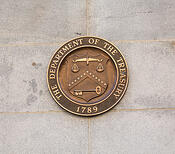 Treasury Under Secretary David Cohen announced Thursday that US airstrikes are having the desired impact of weakening the revenue generating abilities of ISIS/ISIL. Estimates are that ISIS generates up to a million dollars a day through a complicated black market oil sale operation. This financial self-sufficiency is one of the factors in how the group became so strong, and so difficult to starve from funding. According to the Undersecretary, the lack of reliance on normal financial transactions prevents the Treasury from hammering ISIS funding the way it's often possible to do on other groups who rely on banks and other financial institutions to transfer their money.

Phase two on revenue attack, it appears, will be sanctions on the purchasers of the black market oil. Reportedly the Assad regime in Syria and Turkey are often the players involved. Today the White House has announced they will impose sactions on those purchasing this blackmartket oil in addition to continuing airstrikes near refineries to cut off primary supply.

US sanctions would prevent the country or entity in question from using US financial instiutions of any kind. The idea generally is that other countries follow suit - ie British banks would not likely continue or accept business from the entity, etc.

So far, airstrikes by the US and Arab allies have dropped crude production for ISIS to roughly 35% of its prior output, or around 20,000 barrels per day. Continually decreasing global prices means that black market prices have to be dropping as well to maintain the discount - and when you couple that with such a steep drop in production, it seems rather clear that the airstrike campaign is putting a serious damper on fundraising ability.