Back in April the NERA (New England Ratepayers Association) filed a petition that would have changed the way so called "net metering" works for solar energy generation, by essentially considering the excess "buyback" solar energy sold back to utilities as constituting a wholesale transaction, governed by the established rates. (We discussed that here: "Net Metering Under Threat" ).

In June, the FERC unanimously voted to dismiss the petition. That means for the time being, the net metering system as we know it will remain, but the question becomes how long that will be the case, as it's unlikely the proposal offered by NERA will be the last of its kind. For more on the dismissal and potential future of net metering, this article in Forbes has a quick overview:  "Unanimous FERC Decision Saves Net Metering, But Its Future Remains Uncertain"

END_OF_DOCUMENT_TOKEN_TO_BE_REPLACED 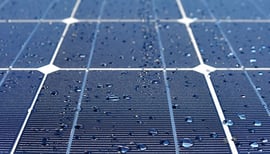 This April, the New England Ratepayer's Association (NERA) filed a petition asking the Federal Energy Regulatory Commission (FERC) to "declare exclusive federal jurisdiction over wholesale energy sales from generation sources located on the customer side of the retail meter (rooftop solar), and order that the rates for such sales be priced in accordance with public law.”

In a nutshell, this would change how the market works for residential solar panels completely. Currently, with net metering, panels generate energy that offsets use by the residence/building and the excess energy produced is "bought back" by the utility - usually via credits to a home/business owner's utility bill at a retail rate.

The NERA petition basically objects to the "buyback" being a retail transaction and believes any utility transaction is a wholesale energy sale and should be regulated and governed in the same manner, including being processed at the same prices. The argument against this of course being that net metering is advantageous to the residential customer, and that has been a large factor in the increase in consumer level proliferation of solar panels. The flip side of that argument, which is the NERA petition's point, is that the transactions being equivalent in terms of energy transfer, but priced such that they are distinctly advantageous to residential customers means they are fundamentally disadvantageous to other players in the field.

It's a little complicated as an issue, if you want more info, I wrote an article for Oil & Energy magazine that delves a little more into the specifics- you can read that article here: "Net Metering Under Threat"