Grid Resilience is top of mind for utility companies, the DOE, and the general public these days, as we see increasingly destructive storms hit the United States. Over the past two years we had five major impact hurricanes (Irma, Harvey, Maria, Florence & Michael) and the consensus is that these will continue, or worsen, over the coming years due to Climate Change.

The goal of resiliency is to have the power grid for an area diversified and upgraded such that it can handle extreme demands. The DOE outlines the major concepts that underlie resilience planning as: Robustness, Resourcefulness, Rapid Recovery & Adaptability. These separate but connected aims allow the grid to both better absorb shocks and more rapidly adjust different factors to respond to risks & outages.

We got a decent look back on how upgrades and risk management planning played out in some of the storms in the past two years. I wrote an article for Oil & Energy magazine detailing each storms responses & issues, as well as more information on resiliency goals in general. You can read that article here: Hurricane Resilience

END_OF_DOCUMENT_TOKEN_TO_BE_REPLACED 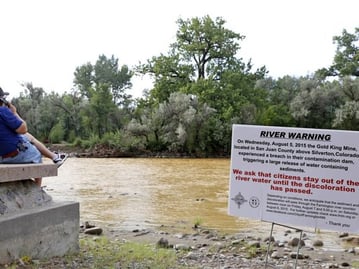 Earlier this week, while an EPA team worked to stem a leak from the Gold Medal mine in Colorado, an abandoned mine not operational since the 1920s, a pressure fluctuation caused hundreds of thousands of gallons of contaminated water to spill into the Animas River. This river feeds into the Colorado River – a main water supply source for the West.

All eyes are on the river now, but the Federal government has been working to cleanup and stop mine runoff for decades. An estimated 40% of waterways in the region have some level of heavy metals contamination from such runoff. In fact, the ruptured mine was being worked on in the first place because testing by the EPA showed that contamination levels were rising to a level that impacted aquatic life.

It turns out that there are an estimated 20,000 abandoned mines in Colorado and up to 500,000 throughout the West. Surprisingly, until late into the 20th century (1970) there weren’t many regulations on mining – meaning essentially anyone could start mining anywhere. As a result, when there were mining booms throughout the West, once a mine either didn’t yield or was exhausted, it was simply left there. As time goes on, water builds up within the mines and leaks into waterways and the surrounding environment, carrying with it, heavy-metal contaminants that could be dangerous in high concentrations.

One of the issues that has made mine cleanup such a slow process is that under the Clean Water Act, you’re legally and financially liable for spills even if it happened inadvertently in a cleanup effort, so stemming the pollution from the mines and handling the arduous process of decontamination has fallen solely on the EPA, and there are simply too many mines to fully decontaminate them all quickly.

It’s also an issue of cost – fully neutralizing the mine involves treating the trapped water to safe levels then releasing it, repeatedly, to the tune of about a million dollars a pop, essentially forever.

A “Good Samaritan” provision has been repeatedly proposed as an addition to the Clean Water Act, so other environmental groups can begin working on mine decontamination as well. Ironically, it sounded like a better idea before the spill than after. It’s hard to imagine an immediate pond containment system to control damages going in as quickly as the EPA was able to do.

The release has certainly put the EPA and their cleanup response in the spotlight.