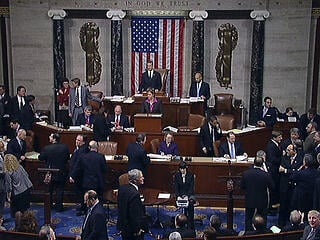 With the ban in place, prices have been artificially depressed at the refinery level due to limited capacity in the face of massive new production, so the thought is lifting the ban will allow producers to get more return on oil produced domestically. Refiners are obviously less than thrilled for the most part, for the same reason.

Additionally, the ability to export is seen as being a potential positive for geopolitics and trade relations with other nations.

On the other side though, environmental groups and the Obama administration argue that lifting the ban encourages further expansion of fossil fuel production, and disincentivizes and slows down the movement to non carbon intensive alternatives.

(For a quick recap of some of the pros and cons, you can skim this article from 2013, when rumblings about overturning the ban began in Congress: Is It Time to Overturn the Crude Export Ban? )

Anyway, the House is the first hurdle in what could be a winding legislative process. Mitch McConnell has historically been hesitant to introduce bills of this nature to the floor, which could be an issue. Additionally, many Senate Democrats are not inclined to vote for the bill out of fear of backlash if domestic gas prices rise for their constituents (even though a recent EIA report indicated there should be no negative impact on consumers). One ammendment added may help entice Democrats though, and thats a provision that will allow higher payments to shipping unions involved, which is a key constituent for those in relevant states.

To top it off, the White House has already announced that the President will veto the legislation, should it hit his desk. Even if the bill gets through the Senate, then, its unlikely to garner nearly enough votes to override a veto.

Long story short, we will probably be in limbo on what actually happens with the legislation for at least another week or two, and its possible it dies in the same fashion as the Keystone Bill earlier this year. Don't expect that the market wont jump around one way or the other on the news though  - even though we really dont know whats happening yet (when has that ever stopped anything?)