RIN Fraud - What does it mean for Biodiesel Producers?

I wrote an article in March's issue of Oil & Energy Magazine adressing the issue of RIN Fraud and the impact the EPA crackdown on the fraud is having in the biodiesel world.

Ironically, 2011 was a pretty great year in a lot of ways for biodiesel and biodiesel producers - production was up, green jobs were being created, we were making progress. RIN Fraud hitting the news late in the year really shook things up however, understandably, considering the fines and penalties at play and the difficulty facing smaller firms currently who have legitimate RIN credits to trade and are facing a marketplace full of cautious (at best) buyers.

Long story short, there have certainly been ripples throughout the industry over the fraud, with more to come likely. It will be interesting to see how it all shakes out.

END_OF_DOCUMENT_TOKEN_TO_BE_REPLACED

The industry buzz at the Northeast Bioheat Workshop this year in Pittsburg centered on the aggressive advertising campaign by the Natural Gas industry that promotes its product as the lower cost, domestically produced and more environmentally friendly solution to conventional oil heat.

NORA president John Huber took issue with the claims to environmental benefits, pointing out that “Methane is one of the world’s worst greenhouse gases, but the natural gas industry has ignored that.” (Methane is the primary component of natural gas and the largest source for greenhouse gas emissions. Methane is lost in all phases of natural gas production and distribution)

Massachusetts Oilheat Council President Michael Ferrante noted that the commercials were largely accurate, but struck a nerve. Ferrante said that the Oilheat market needs the environmental and efficiency benefits of biodiesel in order to compete with natural gas.

Bioheat blended with ULSD at the B20 level clearly outperforms domestic natural gas. However, heating systems are currently only approved at a B5 level. It is estimated that there are between 6 to 7 million Oilheat furnaces in residential homes. Expecting these homeowners to switch to new burners so they can run higher blends of Bioheat is not realistic, so it is critical that Bioheat’s impact on older equipment is assessed.

Michael Devine from the National Biodiesel Board spoke about the extensive marketing campaign underway in New York City to garner market acceptance for Bioheat, saying “Bioheat is the evolution of oil heat.”

Home heat dealers say that establishing legacy safe limits and bringing equipment approved for higher bioheat blends seems slow in coming. The industry is poised, waiting for state mandates to bring bioheat infrastructure forward. Although state mandates put fuel dealers all on a level playing field, it does not with other energy sources. How soon will we see equipment approvals and bioheat mandates to higher blends move forward?

END_OF_DOCUMENT_TOKEN_TO_BE_REPLACED

This month's issue of Biodiesel Magazine features an article from yours truly regarding Bioheat and Off-Road Bio usage from water taxis to municipal heating. Pretty interesting the way Biodiesel has gained strength in areas one wouldnt normally associate with it, especially in the off road arena. 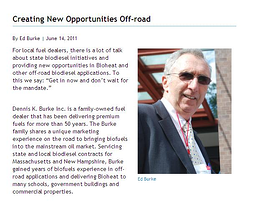 END_OF_DOCUMENT_TOKEN_TO_BE_REPLACED

Déjà vu all over again

Many argue that Massachusetts was very wise to insist on waste feedstock for biodiesel, which takes the food price argument off the table.

As energy independence and reducing spending (especially on foreign energy spending) dominates the news, it is great to have a great story in biodiesel.

END_OF_DOCUMENT_TOKEN_TO_BE_REPLACED

Here are a few 2010 issues I’d like to discuss and get some industry input.

The Massachusetts Biodiesel Mandate, will we see any progress this year?

The Biodiesel Tax Credit is back and RINS values are soaring, does this play a role for Massachusetts?