The Bears Have It - EIA Report Slashes Tuesday's Gains

Today's EIA Inventory Report indicated that Crude Inventories were up 2.8 million barrels for the week ending October 30th, and the market reacted accordingly. API had forecast a build as well, so prior to the EIA release we were trending down about 1%, which accelerated to over 3% once the official numbers came out.


A few interesting notes about the build - it occurred due to a domestic production increase of 48,000 bpd to 9.16 million bpd. This increase happened despite the Baker Hughes announcement that rig counts dropped another 16 to the lowest level since 2010, and despite US imports falling to their lowest weekly level since 1991. (Down to 6.4 million barrels per day, if you're keeping score at home.)

It also happened despite the fact that every single issue that spiked the market yesterday is still very much in play. The Libyan port is still closed under occupation. The Brazilians are still on strike at PetroBras. The Colonial pipeline's Houston facility is still flooded and not allowing any deliveries or originations to occur. (You can get a recap of yesterday here: Monday sinks on Demand, Tuesday Surges on Supply )

And yet here we are, narrowly missing a complete reversal of yesterdays surge across the board.

Gasoline was projected to show a 1 million barrel drop, but instead dropped 3.3 million barrels - yet RBOB settled down -.0536, not quite erasing yesterday's 7 cent jump but coming close, considering the drop in inventory should in theory have pushed gas further ahead.

Distillates did the reverse of gasoline stocks - they were projected to drop 1.8 million barrels, but instead dropped 1.3. ULSD closed down .0625 to 1.5035, more than erasing yesterday's jump of just under 6 cents.

The October Jobs report is likely the next major news for the market, due out Friday. Maybe we will get lucky and get a breather tommorow. One can always hope. 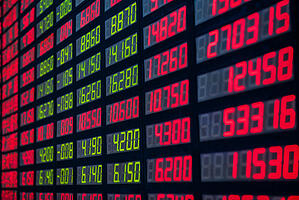 The EIA inventory report for the week ending November 7 showed draws in Crude & Distillates, with a build in gasoline. Crude drew down 1.7MMb and distillates drew down 2.8MMb, while gas built 1.8MMb.

Watching the screen though, you wouldnt think we showed draws - ULSD and RBOB are both dropping like the proverbial stone - both products had intraday lows well over 6 cents, with gas dropping down 8 for a few.

So whats going on? Why even with a draw down on products, and once again heightening tensions in Russia/Ukraine are commodities dropping?

The jobless number report was higher than anticipated by about 10,000, but the numbers are still are hanging near a 14 year low so that ought not be a huge factor in either commodity numbers, or the stock market. The stock market, by the way, is retreating a little from it's record highs and hanging flat on the back of falling energy shares once again, due to falling prices.

We still are in the same situation with OPEC and American production being sky high, and global demand due to economic growth being anemic at best, so the dismal supply demand situation is still at play.

Going out on a limb I would credit the extra oomph of todays drop off to lots of news regarding Keystone - with a bill being pushed through to the Senate that will actually make it to the floor, things are being shaken up on the energy front. Word is, in an attempt to save the seat of Landreiu, from Louisianna, who faces a runoff election challenge next month, Senate leader Reid has agreed to allow the legislation to the floor.

Although most talking heads seem to think Obama will veto - still, the implication is that the midterms probably will be forcing some of the top energy agenda items through, and thats good news  - unless of course you fixed high, in which case dropping energy prices might start hitting you in the wallet very soon.

Bears were out in full force today (actually saw them hit after the close on Monday) as all eyes were watching election results in Italy.  No clear cut winner has been announced thus casting doubt and uncertainty on recently passed austerity measures.   The effect saw the US Dollar rise against the World basket forcing Commodities to fall harder than Tom Brady's Agents Commission check.  Adding to the sell off was increasingly better news from the housing market with December values showing a .2% increase and 6.8% increase year on year.  All this and as I walked into a lunch saw Fed Chief Bernanke on a big screen TV saying the economy is far better off than in recent years and that the FED is currently looking at ways to end its quantitative easing policies.  Today had a flurry of news to push pricing down, but I still hang my hat on  the saying "high prices is the cure for high prices"  as we exit the heating season in the Northeast and some retail stations above $4.00 a  gallon,  some would say the US economy would struggle to support these energy costs.  At the close, Crude lost .48 to $92.63, HEAT fell .0672 to $3.0317 and RBOB tumbled .0795 to $2.9816.

Last week we mentioned that it was going to be a sloppy back and forth week if a debt ceiling resolution was not passed.  As shown below, that was exactly what materialized.  Starting the week, HEAT was at 3.1280 and finished today at 3.0962 with all sorts of gyrations in between.  As traders are not willing to commit either way as a resolution  still looms and a tropical storm hitting the gulf region, it was somewhat surprising to see the market fall off as much as it did mid session.  Both products were down as much as 4 cents on the heals of GDP data being released which showed the economy was basically flat.  Furthermore, it notes that the recession  was deeper than first thought and the economy is obviously growing at a much slower rate.  There is growing sentiment that we will begin to encounter demand destruction at a growing rate if prices do not ease relatively quickly. At the close Crude fell $1.74 to $95.70, RBOB lost .0047 to $3.1129 and HEAT fell .0090 to $3.0962. This weekend will be critical as to how the Markets will shake out for the next few months, as a resolution should see lower prices

May 11, 2011 10:08:00 AM
LADIES AND GENTLEMAN, PLEAS KEEP YOUR HANDS AND FEET INSIDE THE ROLLER COASTER AT ALL TIMES!  What else can you say about the last several sessions that has seen 25 cent drops, 30 cent rises and another 25 cent drop.  Overnight saw big drops on gas as what appeared to be an overbought speculative position put on Monday and Tuesday get sawed off as fears resurfaced that the European Union might not be willing just yet to jump in and help Greece. The subsequent reaction was a large jump in the Dollar, pushing commodities to the floor.  So much for those tight supplies due to flooding?  Bearish inventory data pushed the NYMEX down even further as Crude gained 3.8mbl, distillates fell by 800k and gasolines rose 1.3mbl as most were expecting moderate draws.  For the first time since Rita and Katrina days, the Trade was halted as RBOB losses pushed over 25 cents.  At the close, Crude tumbled $5.67 to $98.21, HEAT lost .1029 to $2.8983 and RBOB  lost and astounding .2569 to $3.1228.   At the end of the day, most were looking at demand figures that showed drops across all products, furthering the notion that Americans are either unwilling or unable to support retail fuel over $4 per gallon.