Future pricing action continues to be as wild as a Patriots game ending, with the average swing intraday running over $.12 from high to low.  Yesterday’s bump higher in diesel was somewhat expected on the heels of three strong down days and a fair amount of market moving news on tap.

First, it appears the damaged section of the Keystone Pipeline is fixed and testing runs are scheduled to take place in the next day or so, but full operation is still weeks out.  This is good news for Cushing to start to rebuild lost input in the last week.

Secondly, a high profile visit to the White House and Congress by Ukrainian President Zelenskyy all but assured continued US backing of the non-NATO country in its efforts to stave off continued Russian advances.  Hard to interpret, as some have the sense now Ukraine can actually prevail in this, while others are viewing this as a very tight rope to walk supplying billions in aid and defense weapons, somewhat cornering Putin.

Thirdly, Inventories showed a steep drop in crude of 5.9mbl (expected as we said last week the pipeline shutdown would show this week).  Gasoline showed a modest build of 2.5mbl but Diesel dipped for the first time in five weeks with a slight draw of just 300,000 bls.  The key driver yesterday appears to be that distillate demand is still healthy showing a 6.6% increase over last week.  Much of it appears to be attributed to the expected extreme cold taking hold of the middle part of the country and power plants stock up on alternate fuels.  Locally in the Northeast, supplies are getting better but still seeing a lot of just in time ship arrivals and kerosene pricing has eased but still at much higher values than previous years.  Hauling capacity looks to be the next hurdle facing region and should the extreme cold linger, it might get rough for some.  That strong supplier relationship we talk about will get you through the next several weeks.

From all of us at Dennis K. Burke, Inc.  we wish you a very happy, healthy and safe Holiday season!

The Market giveth and the Market taketh.

After falling over $.50 last week, front month ULSD has risen almost $.50 this week.  Gains were primarily on the heels of the Keystone pipeline leak that spewed 14,000 bbls (588,000g) of crude into Northeast Kansas late last week, prompting Operator TC Energy to shut down the entire pipeline.  Main note on why this is significant, is that this leg of the pipeline runs to Cushing, Oklahoma which is the primary metric for weekly Inventories.  As of this morning, product has since started to flow but still not through the damaged section which may take weeks to repair.

Again, the fear buying of future products has pushed ULSD almost to where we were at the beginning of the month.  The spill froze any downside potential in the pits with this week’s builds in inventory yet again.  While Crude showed almost a 10mbl increase, expect that to be erased next week with little to no product flowing into Cushing. Distillates gained roughly 2mbl, still well below the 5 year average.   Oddly, demand still seems robust, specifically for diesel which again is helping to push prices higher.

We said volatility will remain in the short term as fuel markets continue to search for a comfortable range.  I would have to believe (hope) that it is under the $3 handle for the front month.  The good news is that it appears Kero is relaxing somewhat, making winter operability cost at least palatable, relatively speaking.  Kero has come down by over $1 in the last several sessions.

The "Price Cap" for Russian crude is somewhat confusing as to the effect or outcome it will ultimately have, as Product is very rarely traded on a fixed number, more often traded on formulas or differentials to a benchmark, so again time will tell if there is any real net impact.

As the cold weather starts to move in, again we can not stress enough to have conversations with Suppliers on product blends, operability and availability.  Looks like we may be in store for a wild winter. 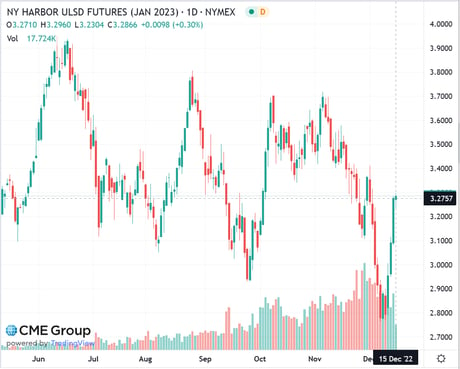 The Swiss Rock Stocks, NYMEX Goes Along for the Ride 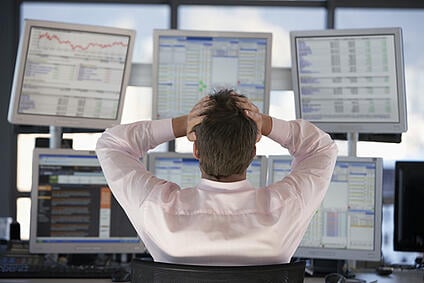 So a quick rundown on what's been happening in the markets this week:

The inventory report from the EIA for this past week pegged Crude up 5.4mmb, to its highest level for this time of year in over 80 years.

The stock markets across the globe went crazy today after the Swiss pulled a surprise move and removed the cap on the swiss franc (the cap keeps the franc artificially low versus other currencies), sending the Euro markets into chaos.Back here at home, dissapointing financial sector numbers pulled stocks down as well. The S&P dragged down with energy players and Best Buys' 10.9%  tumble.

The markets closed down across the board in the US,for the fifth day in a row.

The NYMEX closed down in tandem. Weak global financial data, plus the disappointing domestic bank earnings reports pushed oil down right along with stocks on a renewed concern about global demand levels in the face of oversupply.

Yesterday gas closed up over 8 cents, but today's drop erased a little over 5 cents of the gain. ULSD closed down a little over 3 cents to settle out at 1.6233, more than erasing Wednesdays gain of .0222.

Yet another Keystone Pipeline bill has gone through Congress, and early this week it passed the procedural hurdles required to get it onto the Senate floor. Debate is expected to continue through the week, with a potential vote on Friday.

The court case in Nebraska disputing the route of the pipeline has been settled, in theory removing the last remaining obstacle to the project moving forward.

President Obama has vowed to veto the bill, and it doesnt appear at the moment that the legislature has the votes to overturn the veto, so we shall see what happens there.

The EIA inventory report for the week ending November 7 showed draws in Crude & Distillates, with a build in gasoline. Crude drew down 1.7MMb and distillates drew down 2.8MMb, while gas built 1.8MMb.

Watching the screen though, you wouldnt think we showed draws - ULSD and RBOB are both dropping like the proverbial stone - both products had intraday lows well over 6 cents, with gas dropping down 8 for a few.

So whats going on? Why even with a draw down on products, and once again heightening tensions in Russia/Ukraine are commodities dropping?

The jobless number report was higher than anticipated by about 10,000, but the numbers are still are hanging near a 14 year low so that ought not be a huge factor in either commodity numbers, or the stock market. The stock market, by the way, is retreating a little from it's record highs and hanging flat on the back of falling energy shares once again, due to falling prices.

We still are in the same situation with OPEC and American production being sky high, and global demand due to economic growth being anemic at best, so the dismal supply demand situation is still at play.

Going out on a limb I would credit the extra oomph of todays drop off to lots of news regarding Keystone - with a bill being pushed through to the Senate that will actually make it to the floor, things are being shaken up on the energy front. Word is, in an attempt to save the seat of Landreiu, from Louisianna, who faces a runoff election challenge next month, Senate leader Reid has agreed to allow the legislation to the floor.

Although most talking heads seem to think Obama will veto - still, the implication is that the midterms probably will be forcing some of the top energy agenda items through, and thats good news  - unless of course you fixed high, in which case dropping energy prices might start hitting you in the wallet very soon.