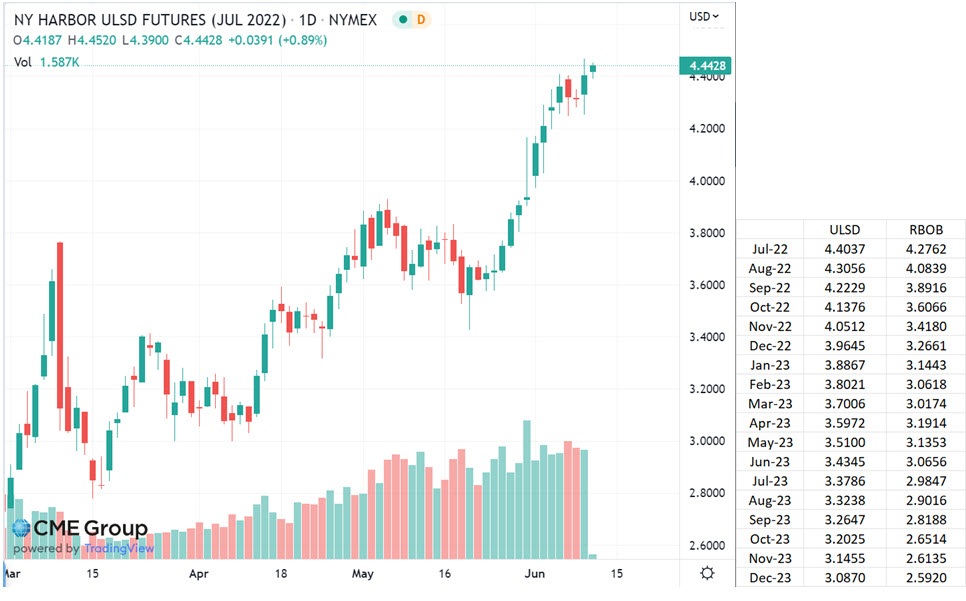 Over the last 2 weeks front month ULSD has risen almost $.80  in futures trading,  but it looks like the driver of the run up maybe that crazy cousin RBOB.  Gasoline typically rises this time of year but many thought this year would be different.  Sky high retail prices and massive inflation concerns were thought to put a dent on demand.  However, this weeks inventory report showed a surprise draw in gasoline stocks and strong demand numbers.  It may be a holiday weekend anomaly, but Americans appear to be taking it all in stride, thus giving buyers no reason not to keep buying.

Diesel has been the passenger the last two weeks.   With a surprise build in inventories (still lowest levels since 2005), most believe it would take a substantially large increase to derail the upward trend.  Demand numbers started to show softening, which is concerning to many, as it may start to show some slowing in the US business cycles.

While OPEC agreed to hike production for July & August by about 600bpd and China put the kibosh on fully reopening major cities, futures shrugged it off as we have only had 2 down days in the last 14 sessions.  Physical supply issues in the Northeast is still a lingering concern as the backwardation, while thinning, is still $.10  to AUG and $.18 to SEPT (see close chart).  This is preventing many from bringing in large slugs of product on fear of the carry loss.  Put it this way.  If you were to buy a house today for $500,000 but were told that in 20 days it would only be worth $400,000, would you do it?

At this point, it appears that the only thing that will bring us back to reasonable levels is strong builds in inventories which will only come with a reduction in the backwardation which will likely occur with weakening demand.  And let us not forget the Ukraine and export situation.

Bulls in driver seat after third up day of specultative buying

With the short trading week coming to a close, and what is typically a slow week, was anything but. Inventories showed a large draw in Crude but slight builds in the...

Crude - both Brent and WTI - continued to drop today on speculations of another inventory build on tommorows EIA report. According to a Bloomberg survey, tommorows...