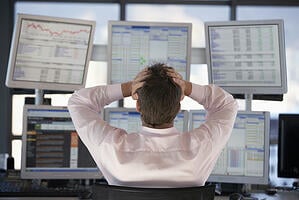 END_OF_DOCUMENT_TOKEN_TO_BE_REPLACED

Brent CRUDE hit over $110 Tuesday for the first time since March 4th on increasing concern over long term energy supply impacts of the mounting Ukrainian situation, and concerns of potential Western (US) interventions. Tuesday saw Ukranian troops clash with Russians at an occupied airport in Kramatorsk, about 100 miles from the Russian border - the first armed clash thus far in the ongoing power struggle. Tuesday also saw Ukranian troops headed toward the Russian border, counter to the tens of thousands of Russian troops reportedly stationed there. Concerns over potential Western response pushed stock markets lower, including the German DAX and Russian MICEX and pushed Brent and WTI prices up, with Brent hitting $110 as we mentioned, and WTI gaining to as much as 104.99 ahead of Inventory numbers due out later today.

The primary cited reason for the jumps is the escalations in the Ukraine, but Chinese Economic data is also looking weaker than projected, with economic expansion numbers clocking in at the lowest we've seen in 6 quarters and falling short of the governments stated target of 7.5% growth. On the bright side, the Hariga port in Libya loaded for the first time in July when it was seized and shut down by rebels.

Domestically, US inventories on gas are projected to show draws of up to 1.75 mb in Bloomberg estimates, while CRUDE is expected to show builds, and distillates are projected to be largely stable. It will be interesting to see how pricing plays out if the EIA report pulls the rug out from under the analysts like it did the last week of March.

END_OF_DOCUMENT_TOKEN_TO_BE_REPLACED

After starting the early morning in the red, Markets made an about face mid morning as new economic news hit the wires. The Jobs report showed an additional 165,000 jobs were added last month, above the 148k expected. That pushed unemployment down to roughly 7.5%, additionally the magic pencil revised March and February numbers up by a combined 60k jobs. While these are encouraging numbers for the US workforce, most agree that the World market may not be as optimistic. A well supplied market and growing concern over an already fragile European Zone, which today cut forward growth rates, has limited the upside to the NYMEX over the last several sessions. Additionally, China is expected to report sluggish manufacturing rates next week. As the day went on, distillate markets cooled off while gasoline still stayed strong. Look for next week to be much of the same as positions look to be solidified as we move towards the summer driving hype. At the close, Crude added $1.62 to $95.61, HEAT gained .0289 $2.8844, and RBOB jumped .0448 to $2.8254