Even though Diesel futures have fallen roughly $.20 in the last two days, we are still almost $.40 higher than the beginning of the month.  Still optimistic that we will considerably lower in the coming weeks, however.

Demand appears to be the underlying factor that is keeping prices from continuing higher.  Yesterdays Inventory report showed that distillate demand was down 3% over last week and down a whopping 18% over last year.  We have mentioned many times that distillates demand, more precisely diesel demand, is often viewed as the pulse of the US economy.  An 18% drop in anything is a lot….

The question remains as to why are we still at such high price levels, relatively speaking.  I would like to say it is simply fear of the unknown, but that should only last so long.  The world seems to be adjusting to curtailed Russian product, and Russia appears to have found other markets just fine.  Granted, we have not seen extremely cold temperatures here or abroad.  However, Kerosene pricing has skyrocketed in the last few days pushing winterized diesel in some areas up almost $2.00 in a week.  Inventories remain low, but again, so is demand and the market backwardation persists. Costs of all other goods appear to be falling, or as some say “just not rising as fast” and unfortunately, it points to the oil markets still having inflation hedge premiums built in to the price.  That will take time to remove and still hope to see futures less than $3 soon.

The ability to capitalize on the dips for the short term appears to be the prudent approach.  Talk with your Rep about seeing if this makes sense for your business. 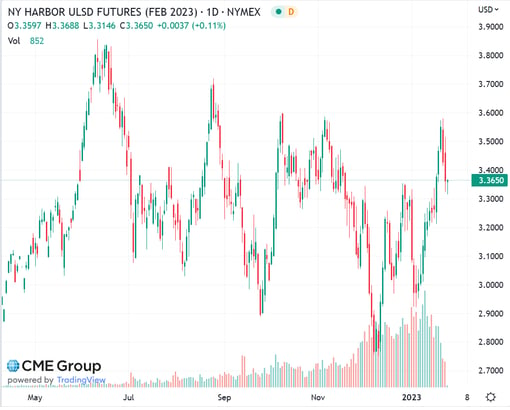 We have been saying for several weeks that the distillate inventory picture is not the brightest, even more so in New England.  The news cycle has taken hold of this, and judging by the number of calls and conversations I’ve had in the last week, it is starting to sink in.

We currently sit about 20 million barrels below last year of distillate inventory.  The chart below shows a five year picture and very infrequently would we dip below 120mbl of storage.

With winter approaching, and New England the primary consumer of Heating Oil, the fear is there will not be enough to go around should there be an extended period of cold.  Moreover, if power plants get curtailed from using Natural gas, the alternative source is diesel fuel.

Courtesy of NEFI, the winter temperature outlook shows the Northeast to be in the third year of a La Nina pattern and that typically means a warmer than average season ahead of us, albeit with a colder December to start. 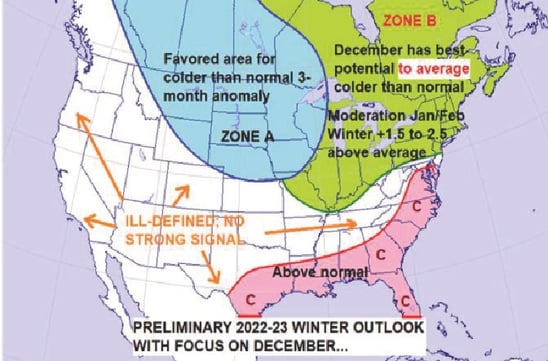 Exports of Distillates continue to be robust, as we are sending about 1.2mbl per day overseas.  Last week we mentioned that quick relief might come in the way of releasing finished product reserves into the market instead of unfinished crude.  That has fallen by the wayside over the last several days, as this is a market condition and not a physical event, like the last release during Super Storm Sandy.

Government officials have been quoted as saying “nothing is off the table” in terms of a solution and we have now seen another idea floated which on the surface makes sense.  It has been suggested to relax the sulfur specification on distillates to allow shuddered refining equipment to come back online, thus boosting production and requiring products to remain domestically.

Years ago, refiners chose not to invest into units in order to produce the ultra low sulfur products we use today (15ppm vs 500ppm).  Opponents say that the turn around time would be too long, and not the quick fix we need.

Price action continues to be extremely volatile, and I would expect that to stay through the end of the year as the backwardation in the market remains, limiting any excess or “rack” gallons to be available.  Again, having a supplier with a redundancy of contracted supply options and the means to get you product will get you over this hump and better positioned in the future.

Fundamentals Continue to Push Futures Around

If you were to read the news, it is almost impossible to tell which way the Oil markets are going as the volatility has all pits in wild daily swings.  Fortunately for most of us, diesel prices have corrected over $.30 in the last three days and all but erased the early August climb.

Demand, Economy, and Inventory are the fundamentals that continue to push futures around.  Reports from the IEA on worldwide demand “coming to a halt” in the fourth quarter due to slowing global economies and continued lockdowns in China rippled through the market yesterday along with interesting Inventory news.  Demand right now sits at its lowest point since JAN21.

Shown below, gas stocks fell to a 10 month low, but was taken lightly as it is typical this time of year as we switch seasonal grades.  The bearish news came with Distillates building for a third week in a row, albeit still 12% off from a year ago.  Unfortunately for us in the Northeast, our stocks fell by 3%.   Exports of distillates finally fell last week but again they are a staggering 83% higher than last year. With the FED poised to make another 75 basis point rate hike, most anticipate the collateral damage to be demand.  Thus fueling sell off.

This summers price action is truly one for the record books.  Since May, ULSD has gone up $1, down $1, Up $1 and down $1.  Remember the days that if the market moved $.01 you had  a meeting to figure out what to do?

Having a good relationship with your supplier is critical during these times.  While it is impossible to predict what the pits will do, its always best to at least know what is happening. 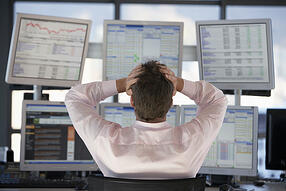 Reports indicate a 2.8mmb build in the period for Crude, draws on gasoline of 2.9mmb and a smaller draw of 2.1 mmb on distillate inventories.

We have seen WTI trending toward the $60 benchmark, where it continues to trade today after inventory levels were announced. Gasoline on the other hand, was down over 5 today after the news.

At first blush the drop on gas seems surprising, given the draw down, but production levels are still very high (9.7 million barrels per day) and very much outpacing projected demand, even as the U.S. heads toward "driving season".

Of note among analysts, diesel has remained relatively stable in the face of fluctuating inventory and international headlines, and the thought is that this period of calm is caused by (and will be short lived because of) the IMO Bunkering regulation changes set to take effect in January. Refiners, marketers, and end users are all eyeing potentially huge upcoming shakeups in the market there and the anticipation is putting a damper on major swings or selloffs in the current market. Or that's the prevailing theory, anyways.

So what is IMO 2020? The short version is that as of January 1, 2020 marine fuels will be subject to a global cap of 0.5% sulfur (the current level is 3.5% in non-ECA/Emission Control Areas). Since this is global, it will impact essentially all refiners and supply point inventory options out there, in addition to the obvious end-user impact.

(If you want a more in depth version of exactly what IMO 2020 is about and its anticipated impacts, Sea Trade Maritime News has a fantastic explanation here: Seatrade Maritime News: The 2020 IMO Fuel Sulphur Regulation  )