A continuing poor outlook on gasoline demand and (presumably) increasing stockpiles continued to push RBOB futures down this week -  that is until it took an abrupt about face today on a shocker of an inventory report. Analysts were predicting a build of around 300,000 barrels but - surprise! - the report showed a draw of over 4 MILLION!

ULSD settled up as well  - analysts had predicted a 900,000 barrel build and instead we saw a 1.8 million barrel drop.

Prior to today prices were looking to go the right way - Monday saw CRUDE futures hit a 6 month low. The month of July saw WTI fall by over 6%, which is the biggest drop we have seen in more than 2 years. Prices had hit a high of 104.59 on fears over Russian supply (export) disruption after the MH17 flight crashed in Ukraine, but have backed off since those fears haven’t come to fruition.

Earlier this week additional seemingly positive economic indicators also pushed the dollar up, which often causes a drawback in commodity pricing - which we saw happening until today's inventory numbers were released.

Hopefully given the generally positive economic data for the week, traders adjust to the inventory shock quickly and we'll see a correction over the next few days. 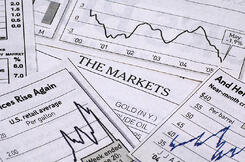 Last night API's set the early tone for todays rice action as preliminary numbers showed large draws in distillates.  Those numbers were confirmed this morning with the EIA releasing a staggering 4.8mbl draw in distillates vs expectations of a mere 700k.  Gasoline was down slightly at 345k and Crude showed a slight build at 375k bls.  On the surface it appears distillate demand is on the rise, not only in the US, but also from an export position.  Soon after the data released, pits jumped almost .04, and stayed in that range for most of the afternoon.  Supporting the bullish price action was FED meeting minutes which appear to confirm last weeks chatter that we will start to see some significant unwinding of the Bond buying program in the months to come, as well as a positive retail report for October.  The hope is that a positive October doesn't turn into a lackluster November and December which is often the case in the retail world.  News hit mid afternoon of US-Iranian talks ended almost as quickly as it started, one report said the talks lasted less than 10 minutes with few words spoken.  Even with the draw in distillates, the market appears to be well supplied as Crude actual lost .01 to close out at $93.33, RBOB added .0235 to $2.6630 and HO led the gainers settling up .0487 to $2.9545.  Again, well within its comfort zone.

Aug 10, 2011 5:39:00 PM
We continue the "new normal" roller coaster ride as NYMEX values once again turn sharply positive on the the heels of a very bullish Inventory report.  Not helping the cause was the FED announcing yesterday that they will hold rates very low for the next two years.  It was the first such comment that actually put a timeline on Interest rates.  Furthermore, the comments are a complete 180 degree turn in approach from the usually vague board.  With the greenback being pushed lower, Commodities surged higher beginning just after yesterdays close.  DOE numbers showed a staggering 5.2mbl draw in Crude, while most expected a 1.7mbl build.  Gas fell 1.6mbl vs a 700k expected build and distillates drew 737k while analysts expected a build of 1.25mbls.  All this while the DOW continues its own seesaw as our 401k's become 201e's!  Currently down over 300 points, the EIA just recently reported that it sees "significant downside risk" should current financial market concerns become more widespread.  Either way, we are above that magical $2.80 number again on HEAT as it closed up .1005 to $2.8653, RBOB gained .1149 to $2.7825 and CRUDE added $3.59 to $82.89.

Today’s NYMEX action could be characterized as being at a 4-way stop sign with every car staring at the other to see who is going to move first, and nobody moves.  What...