Today saw a swift and decisive reversal of last week's out-of-nowhere rally on Crude, Commodities, and Stocks. Not too surprising, given there were really no changes in fundamentals that justified a rally of the magnitude we saw, outside of the ever present fear of supply disruptions whenever the East Coast faces major snowfall, and the market being technically oversold.

Today we saw the real correction however.

Iraq announced a new record high output for December at over 4 million bpd. Ironically, given the drop, OPEC announced today that there would be a meeting called (reports are by Qatar) to address "cooperation" from non-OPEC countries in curbing supply to stabilize prices. You read that right - NON-OPEC countries.

The market essentially shrugged off the suggestion, as its improbable to impossible that the US would cooperate, and it's equally unlikely Russia, or anyone else will either, especially if the Saudi's, Iranians, and apparently now the Iraqi's as well  have no intention of backing off their production (and therefore market share).

Tommorow the API projections may cause ripples, but the major news will likely be Wednesday's EIA report, barring any unforeseen worldly events, of course.

Oil prices kept sliding this week on positive signs, despite a draw in US Crude supplies.

Tuesday dropped on news of Iraqis striking an export deal with the Kurds that will resume the flow of oil from Kirkuk that had essentially been stalled out previously. Brent responded to the news by almost completely reversing its 3% gain on Monday and settling down $2 to $70.54. WTI, which was up 4% on Monday also dropped a little over $2 to close out at $66.88.

Besdies the Iraqi deal, factors in play in the selloff were also that the CME Group raised initial margins on crude oil futures by almost 16% which probably spurred sell offs, and the dollar also hit a 4 year high, which continued to push commodities down across the board.

EIA Inventories out Wednesday saw draws on Crude (-3.5MMbbls) with builds in distillates and gasoline. NYMEX still closed down, although far more moderately than Tuesday's drop off, with ULSD settling out at 2.1334 (-.0210) and Gas settling out at 1.807 (-.0046).

The Fed's "beige book" notes came out Wednesday as well and were generally positive on the economy as a whole  and referenced the growth potential from lower energy prices, especially from consumer spending.

There is also some positivity in the shale situation, despite the falling prices from oversupply, analysts are still predicting a minimum increase in production for 2015 of 500,000bpd, in addition to production from new Gulf projects set to come online in the near future. 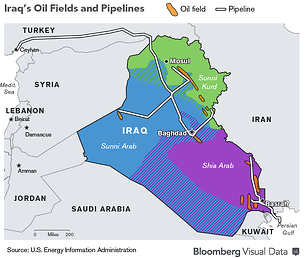 Both Brent and WTI shot up 2% today on last nights news that ISIS insurgents in Iraq captured Tikrit and Baiji, and were continuing their march towards Bahgdad.If you were watching the screen, you also saw ULSD shoot up .085 to 2.9893 and RBOB hit 3.0837, up .0829 on the day in reaction.

Iraqi production levels have been stable around 3 million barrels per day, making Iraq OPECs second largest producer (behind Saudi Arabia) - so the supply concerns we're seeing push prices up at this intensity level are not unfounded.

Essentially all of Iraq's oil production comes from the southern, Shia portion of the country by Basra, (see map from Bloomberg above)  where militant influence is essentially non existant (at least in comparison) - so some speculate that even should the Baiji refinery or additional cities fall, actual supply is unlikely to be affected as the area is well guarded and safe. However, it pays to keep in mind that no one saw Mozul or Tikrit being as vulnerable as they apparently were - the invasion of Mozul saw over 500,000 people flee the city in 12 hours, including basically the entire coalition of American-trained Iraqi security forces because of the level of violence and choas that erupted. It's less likely that would happen further south, given the relatively small insurgent force and the steeper odds they would face in terms of fighting back - but its certainly not an entirely unreasonable fear.

The Obama administration has stated they are "considering all options" - air strikes, drones, etc but have not made a decision at this time. It would seem unlikely that an attempt to garner public support for re-entrance to Iraq would be an easy (or possible) task, all things considered. Ironically, the air strikes on Syria that  the administration faced such backlash for last year were directed at stopping the violence in the area that involved ISIS - the same group now surging in Iraq. Not a good sign for approval for Iraqi strikes. Thus far neither the UN or US has said they will step in to aid the Iraqi government - a fact that it certainly not easing concerns in the market, one would think.

In the grand scheme, considering price volatility and levels as a whole, we're fortunate that some areas (like the US) have seen production booms that have offset some of the drop offs from OPEC nations (mainly Libya) as its helped keep prices overall more stable - the jump in 2012 for example would probably have shot way past a 2% spike. If supply gets disrupted in Iraq though, given its the second largest OPEC producer, that may cease to be the case, which is probably the more far reaching concern pushing prices than isolated fighting would on its own. 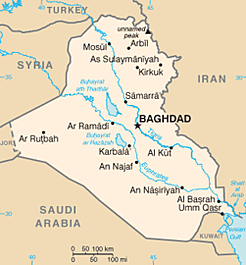 First the usual news - US Crude Supplies once again dropped (to 386.9 million) and more importantly perhaps, Cushing levels dropped again as well. Cushing stocks are down 49% since the Keystone's lower leg started moving its supply to Gulf Coast Refineries. WTI has been climbing steadily the past couple days, and some analysts are predicting WTI hits $105 soon. (Hopefully not!) We also saw gasoline and ULSD up between 0.6-0.9% throughout the day with the intraday high for gasoline hitting 3.0021 and ULSD's intraday high hitting 2.9027.

Brent was up as well on production announcements from OPEC, and an Al Qaeda affiliated group's seizure of the city of Mozul in Iraq. OPEC kept their production target the same, despite the growing fighting. The obvious concern with Iraq is that increased fighting will further disrupt supply. Currently, all exports from the country (a little over 3 million barrels per day) have to go by tanker through the Persian Gulf - the main pipeline that runs from Kirkuk to Turkey has been closed since March. The capture of Mozul and the uptick in violence in the area has caused repairs to the pipeline to be suspended completely at this point. Further supply disruptions are basically a 50-50 proposition at this point, which is making the European markets understandably nervous, and pushing Brent prices up.

In Virginia, House Majority Leader Eric Cantor got blindsided by his Tea Party primary challenger in an upset that literally no one saw coming. Bloomberg News noted today that there is some serious concern among Wall Streeters, as Cantor was generally seen as an ally for them in the Republican party - supporting TARP and the Export-Import Bank, etc. Wall Street appears to be concerned about potential gridlock in Washington going forward if this primary is an indication of how November may shape up, especially given the debt ceiling issue looms large again in March. (Incidentally, gridlock in Washington is probably good news for the rest of us!) At any rate, between the political upset, and the World Bank revising growth expectations down (specifically for the US) stocks drew back, with utility, industrial and financial stocks the most impacted.