Markets Up on OPEC+ Hope and Coronavirus Slowdown

WTI Crude traded & settled below $50/bbl earlier this week, as prices continued to slide across commodities. Today, however, we saw the trend reversing, with the market up this morning by almost 3%. (Early on, we were up over the 3% mark but gains dropped off slightly after the EIA inventory reports were released this morning.)

EIA Inventories showed builds on Crude of 7.5mmb, well above analyst expectations. Gasoline drew down 100K bbl, and distillate stocks dropped 2mmb, as well. Distillate numbers were essentially in line with expectations. Crude pared about .5% on the builds, and gasoline moderated but stayed up, as analysts were predicting builds of ~700K barrels versus the actual drop of 100K barrels reported.

In broader news, most of today's increases are being pegged on confidence that the OPEC+ production cuts supposedly forthcoming will both be in effect quickly, and will see full member adherence to new lower limits.

Also, China is reporting the lowest number of new Coronavirus cases since January, which is continuing to restore confidence in their economy and calming fears regarding a longer term global slow down on oil demand growth.

END_OF_DOCUMENT_TOKEN_TO_BE_REPLACED 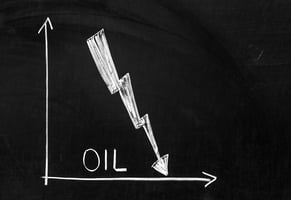 After what seems like 76 days, January is finally over.

As it goes into the books, January 2020 will go on record as having the largest drop in Crude prices since January 1991 - with a drop of 15% (around 12% on Brent). That's a lot on it's own, but it's especially surprising if you remember that the beginning of the month saw huge spikes on the US-Iran Strikes.

The largest driving factor dropping prices now is growing concern about the potential global economic impacts of the Coronavirus spreading from the Wuhan province in China. There have been several cases now outside of the original geographic area, including the first confirmed human to human transmission in the US.

Late Thursday the World Health Organization (WHO) declared the virus a global health emergency. Rumors abound that the State Media in China is vastly under reporting the numbers when it comes to official infection rates and the death toll. Whether that is true or not, it has thoroughly spooked investors and traders, as global markets and the NYMEX tumbled this week.

Wednesday's EIA report showed domestic Crude builds shot way past expectations, clocking in up 3.5mmb for the week ending January 24. (Gasoline also hit a high of 261.1mmb). Obviously builds do not bolster prices, but Wednesday was relatively calm as compared to both Monday & Thursday. Thursday alone saw a 2.2% decline in Crude prices (to $52.14), and a drop of over 6 cents on ULSD at the close.

Markets kept the downward trend going today as well, with March contract month numbers closing down .0136 on ULSD & off 14 points on RBOB, with Crude settling out at $51.56/bbl.

Reportedly, OPEC is already in discussion to move their March meeting up to promote cuts and stem losses. It's worth noting that the Libyan outage had essentially zero effect on prices this week, where it otherwise (presumably) would have - so the OPEC changes will likely need to be substantial to move the needle, unless the Coronavirus dies down relatively quickly.

So while we don't know how long prices will be depressed, or when they might reverse, what we do know is that times like this it makes sense to reevaluate the strategies you use to hedge against the market with contracts or variable options, so you can get ahead of the next spike.

See you in February!