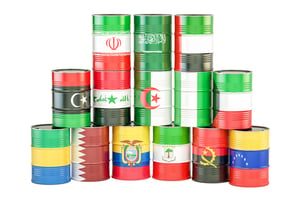 WTI jumped over 5% late this morning, as news broke that OPEC+ members would be agreeing not to raise production levels in April. According to reports, the current established levels for each of the member countries will be continuing as is through April and May, and the Saudi's are planning to forge ahead with continuing to keep the additional 1 million barrels per day offline as agreed to for February and March.

The news of continued cuts leaking from the (currently still happening) meeting surprised the markets, which is part of why we are seeing such a jump - often the predicted outcomes are "priced in" but today analysts fully expected that the ruling would be to let production cuts expire at the end of March as scheduled, and assumed Saudi Arabia would be ramping up production. We have started to see signals of demand levels returning, which, along with the ongoing price rally, had made analysts comfortable that OPEC would begin to ramp production levels back up. Reports indicate that Saudi Arabia urged caution and pushed for today's cut extensions, with Energy Minister Prince Abduliziz bin Salaman saying "Let us be certain the glimmer we see ahead is not the headlight of an oncoming express train"

Yesterday, prices jumped as well as the weekly EIA data for the US showed that the snowstorms and widespread freezing that impacted states in the Gulf Coast region continued to wreak havoc on refinery utilization. Crude stockpiles ramped up by 21.5 million barrels for the week ending Feb 26. That build is even larger than what we saw last April when the sudden imposition of COVID lockdowns demolished demand across essentially all sectors immediately. Crude built as a result of the lack of refinery capacity still in effect, and the opposite was seen (of course) on refined products. Although draws on refined products were clearly predicted, the EIA report still shocked as it showed draws on gasoline of 13.6 million barrels (about 5 times the anticipated draw) and distillates drew down 9.7 million barrels, versus the 3 million predicted.

In other news today, Houthi rebels in Yemen are claiming responsibility for a missile strike on a Saudi oil facility in Jiddah, in a continuation of infrastructure strikes in the ongoing proxy war. The conflict is definitely something to keep an eye on - as we saw in September 2019, attacks on Aramco infrastructure can rock the markets pretty severely.