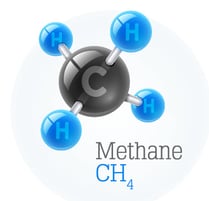 The Biden Administration has announced new methane regulations from the COP26 Climate Summit in Glasgow, Scotland this week. Estimates are that the new regulations will affect  up to 75% of the methane emissions in the United States. Regulations will apply largely to the Oil & Gas industry, specifically addressing “flaring” (purposeful venting) during production and leaks across the system infrastructure.

Methane is responsible for up to 30% of global warming, according to the UN Environment Program, and is estimated to be 25 times more potent than Carbon Dioxide. In recent years this had led to more focus on methane (versus Carbon) emissions, as because of the potency, decreases in methane are much more likely to have a faster and more meaningful impact on slowing Climate Change.

If this sounds familiar, it’s likely because in 2014 the Obama Administration announced similar Methane regulation controls (you can get a refresher here: Methane & Consumers Giving Nat Gas Headaches ) Those rules were enacted in 2016 and subsequently relaxed by the Trump Admin, before being reinstated by the Biden Admin. Hard to keep track of.

The oil & gas industry is responsible for an estimated 30% of methane emissions domestically, and the new rules are expected to reduce emissions from equipment, production sites, and covered areas by up to 75%. In tandem with the expanded EPA regulations, the DOT’s Pipeline & Hazmat Safety Administration is implementing the PIPES act which upgrades and expands existing pipeline setups to cut methane leakage. Other targets of emission reduction are landfills, and enhancing the abandoned mine & well closure program – orphaned mines have been an oft ignored thorn in the side of the federal government & EPA for decades, abandoned mines often leak methane and other gasses, or pollute their areas (For a refresher on that, check this article out: Accidents Happen: EPA Spill Highlights Difficulty of Mine Decontamination)

In an odd continuation of an ongoing trend, the new methane regulations will be “voluntary, incentive-based” changes in the Agricultural sector. This would seem to clash with the global concern over agriculture produced emissions, particularly those from concentrated feed lot (CAFO) based livestock production. The agricultural sector produces emissions comparable with the entire transportation sector (including airplanes) globally (14-18% for both), and agricultural emissions have increased approximately 12% since 1990, which is in contrast to the focus on emission reduction we have seen implemented (in a mandatory fashion) in other sectors. In terms of emissions, the US Agricultural sector produced approximately 698 million metric tons of CO2 equivalent in 2018, a staggering 36.2% of which was in the form of methane.

One of the items regarding agricultural emission control in the White House Proposal is investment in methane reducing practices like “alternative manure management systems”. Presumably (hopefully) this would be an investment in technology like the anaerobic digester technology we have seen make an appearance in MA, where dairy farmers have been diverting manure & food waste to be upcycled into energy. (More on that here: Mass Dairy Farmers Use Food Waste & Manure to Generate Renewable Energy)

So while we will have to wait to see how the new proposals take shape in actual regulation and enforcement, it’s worth noting that according to reports, the American Petroleum Institute (API) appears to support the proposal, with a response indicating they were “committed” to “continued progress” on methane emission reduction. 2020 methane emissions by oil & gas were down 10 percent versus 2019, but that was as a result of a collapse in production, not because of corrective action. The IEA estimates that 10% of methane could be reduced “at no perceptible cost” and where the US (along with Russia) is one of the world’s largest emitters, the new Biden regulations are an attempt to remedy that and push forward progress on a broader Climate agenda.