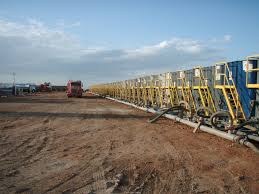 The White House announced today it is taking steps to issue methane emissions regulations at fracking sites. According to the State Department the strategy has several recommendations that apply to multiple sectors but the oil & gas recommendation - specifically aimed at fracking emissions, topped the agenda.

The move is an apparent win for environmental groups. Methane has an estimated 20 fold impact on the environment versus carbon dioxide. They argue that even though Nat Gas emissions are environmentally positive versus coal at roughly half the impact, methane being 20 times more impactful means leaks, which are not uncommon, can wipe out the gains natural gas makes possible.

In some sense the announcement this Friday is a head scratcher, as it will obviously raise the cost of fracking which is of note since it comes on the heels of Obama's announcement in Brussels that he will support increased Nat Gas exports of fracked North American Nat Gas to Europe to help curtail the over dependence the region has on Russian oil and gas supplies.

It may be that the announcement of new methane regulation on the fracking industry is a hedge against the impending backlash from environmental groups on the Administration's new stance on exports, or it may simply be that potential increased production and profitability of fracking once exports are opened up makes it an opportune time to address costly regulations.

We will know next week what the backlash, if any is, and what impact we might see on the industry if the regulations move forward. Stay tuned!

Prior to the midterm elections, Congress sent numerous bills to the Senate...

Even as Coronavirus disrupts business as usual, talks regarding the TCI (Transportation Climate Initiative) continue via video conference and email amongst the involved...