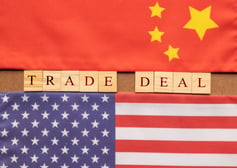 It's not because there's nothing going on but because there is a lot happening but it's sort of up in the air which way everything will go.

The ongoing US/China trade tension situation is both the major factor and a good example - "Phase One" of a trade agreement is in the books as of Wednesday, including a pledge by China to buy "at least 52.4 billion of US Energy products over the next two years" (although what that entails specifically was not clarified)... That sounds like news that should be pushing oil up substantially -  but we don't actually know if any trade deal will change demand forecasts, so it may be that pricing is largely unaffected.

Some of the confusion is that this is "just phase 1" and the US has announced that they are not removing tariffs on billions of dollars of Chinese goods until phase 2 (whatever that is) is agreed to, but we have revised tariffs down substantially on 120 billion OTHER Chinese goods previously at a higher rate.

Essentially, no one is really sure what we can expect to see in terms of real impacts from Phase 1 -or how long Phase 2 will take.

(You can read the details of Phase 1 in this article on MarketWatch: "Trump signs landmark China deal and says removal of tariffs would come in next phase").