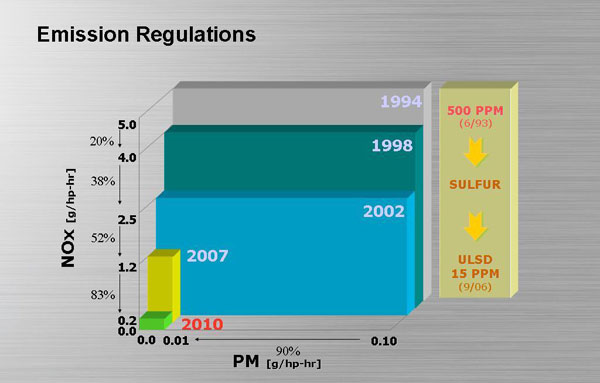 Diesel Engines have sure come a long way from the noisy, clunky, smelly, black smoke pumping trucks we used to see. Today's diesel engines are quiet and clean, and in the case of 2010 model year and later vehicles - they even have emissions ratings better than many of their gasoline counterparts. How did that happen?

The first step was the big one - the switch to Ultra Low Sulfur Diesel dropped the sulfur content from up to 500 parts per million to a max of 15 parts per million, which improved pollution levels like crazy and got rid of the black exhaust.

The other major shift came as a result of the EPA's 2010 policy on reducing the NOx levels in emissions to almost zero. This was accomplished with the implementation of SCR technology and the use of Diesel Exhaust Fluid (DEF) - DEF is injected into the exhaust stream and neutralizes NOx into Nitrogen and Water Vapor.

If you want to learn more about SCR specifics and how DEF works to eliminate NOx emissions, You can find out everything (and probably more) that you ever wanted to know in this new product information video from Peak at the following link: