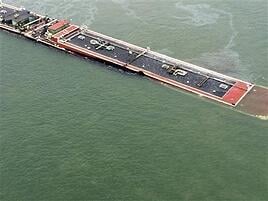 The first half of the week saw futures up and down on reactions to international tensions, and on the news of the 22nd’s collision between a bulk carrier and a barge resulting in the temporary closure of the Houston shipping channel connecting the Gulf of Mexico with Gulf Coast refineries. The collision resulted in a spill of up to 170,000 gallons of bunker fuel into Galveston Bay and caused immediate closure for cleanup operation, according to the AP in Houston. Tuesday saw the channel partially reopen, but the Coast Guard reported it would be an additional several days before it reopened to full capacity. About 10% of US refining capacity is based in the Gulf area. The positive news is that the channel will reopen relatively quickly and isn’t anticipated to have any long term price implications.

Of more concern for long term energy pricing is the growing and continued tension over Russia’s annexation of Crimea, and the potential impacts on the European energy situation that could hike prices significantly. We will likely see impact of US and/or G7 proposed sanctions begin to hit the markets this week or next, especially if significant action is taken on the proposed intervention on Russian oil nat & gas dependency, and on Emergency Funding measures for Ukraine. In the US, the Senate voted down the IMF/Ukraine Emergency fund Legislation presented on Tuesday, but another vote on the bill without the more controversial IMF reforms included is scheduled for Thursday, and according to both Speaker Boehner and Senate Majority Leader Reid, it is expected to pass both houses.